Football Class of 2018: Capsules and Highlights

While the power went out all day Wednesday and some of Thursday, Villanova and the college football world kept moving, as it was National Signing Day. Andy Talley and his staff received 14 letters of intent to play at Villanova. There will also be several preferred walk-ons coming to earn a scholarship. Let’s take a look at who will be coming to play for the Wildcats this fall:

Bednarczyk announced his commitment to play at Villanova back in July before his senior season at DePaul Catholic. He has a similar playing style to current starting quarterback John Robertson. Bednarczyk was listed as a pocket passer according to ESPN, but his highlights show that he is a dual threat quarterback that can run and pass effectively. He led DePaul Catholic to a state championship in his senior year. He also picked up first team all-conference and all-county honors along the way. In his third year starting for the Spartans as a senior, he completed 94 of 177 pass attempts for 1,667 yards with 18 touchdown passes and 6 interceptions. He also added 514 yards and 5 touchdowns on the ground off of 52 carries.

The runningback from Toms River, NJ ran for over 1,000 yards in each of his last two seasons. The senior captain ran for 1,043 yards and 12 touchdowns off of 147 carries. He also added 10 receptions for 133 yards and a pair of touchdowns. He also played safety, tallying 54 tackles and an interception this past season. His efforts got him All-Shore and All-Class A South honors. He was also named All-Shore his junior year. He brings a nice blend of power and speed, and of course more depth at the runningback position that will begin to thin out after next season. 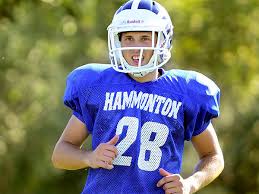 This three sport athlete (football, basketball, and baseball) has committed to play wide receiver at Villanova. His height has been listed differently from site to site, but it does not change the fact that he can play. Named first team All-South Jersey and first team All-Cape Atlantic League in his senior year, the captain of the Blue Devils racked up 26 receptions for 502 yards and 8 touchdowns. He also played safety and was the kicker for Hammonton. Padovani was named ESPN 97.3 FM South Jersey’s player of the week (week of October 14, 2013). He boasts a 4.5 40 yard dash and a 33 inch vertical leap.

A quick shoutout to Phillips who is also from Section 1. Three months ago, he was expecting to play Division III football somewhere, as he went unrecruited for awhile. He didn’t show up on the radar until mid-December. Then FBS colleges scrambled to make room on their rosters for him. Nebraska, Arkansas, UConn, and Georgia Tech was after Phillips. Michigan State contacted him a number of times. Through nine games he rushed for 1,074 yards off of 79 carries for a whopping 13.6 yards per carry. He also added 18 receptions for 279 yards. He scored a total of 12 touchdowns. The speedy back will be making the transition to slot receiver, but I wouldn’t be surprised if he plays a role similar to Jamal Abdur-Rahman. He was named All-League and All-Section 1.

A great last name for a lineman. Hitner put on about 50 pounds in the offseason before senior year, adding to his 6’6″ frame. He was listed as 205 pounds in his junior year and then he made the big change. He played guard for Garnet Valley, but he is willing to do what it takes to help the Wildcats. It is very possible he will be moved to tackle if needed. Hitner gets off the ball very quickly, getting the first hit into his opponent in front of him. He is very physical, keeps his legs moving to get a good drive, and does not stop until the whistle blows. He helped Garnet Valley to an 11-1 record. Hitner was named All-Central League and received an honorable mention for the All-County team.

Buchalski will be joining the Wildcats as an offensive lineman. He was an offensive tackle and defensive end for Miller Place. He possesses great strength, easily driving opposing defensive linemen with his hands. He is big and physical, exploding out of his first step. For someone his size, he moves well. In several clips of his highlights, he is seen doing a backside cutoff block, looking to get the safety on the other side of the field. He has started games for Miller Place since he first stepped onto the gridiron as a freshman. He was voted team captain his junior and senior year. He was named first team All-Division and first team Suffolk County. He is also quite the student, being named to the New York State Scholar Athlete Team.

Drains was a two-way lineman who opted to play on the defensive side of the ball, where he made many big plays for Father Judge this past season. He played as an interior defensive lineman in Father Judge’s 4-3 defense. He has good mobility and when combined with his strength, it poses a terrible combination for offensive linemen. He does not give up on a play, always seeking to get to the football even when the runningback goes the opposite way. He clocked in a 5.0 second 40 yard dash and bench presses 325 pounds. He was also a wrestler in high school. He was named first team All-Catholic League this past season.

Young did not get to play his senior year at Souderton. The big, bruising lineman broke his leg before the season opener. No worries though, because now he is playing Division-I football. He was named captain his junior and senior year. He played both ways, but off the gridiron he was also a wrestler. Wrestlers and defensive linemen make a great mix. He was voted team defensive MVP his sophomore and junior year. In his sophomore and junior seasons he was named first team Suburban One-Continental for offense and defense, as well as first team All-Intel Defense. He was named to the All-State second team offense his sophomore year, and All-State honorable mention his junior year. Young also has a 3.8 GPA.

Shockley was a distinguished athlete out on the football field and the wrestling mats. He played tight end and linebacker for Millville, where he received numerous honors. He was named first team All-League his last two years and first team All-South Jersey. He was named the 2013 Player of the Year by the Daily Journal. Shockley was the recipient of the 2013 National Football Foundation & College Football Hall of Fame Scholar Athlete Award. Out on the wrestling mats he had the second most wins in school history. He boasts a 4.7 40-yard dash and 315 pound bench press. He racked up 110 tackles, 5 sacks, and 2 interceptions this past season.

Named as a top 5 linebacker in New Jersey, Jeff Steeb is a physical, hard-hitting linebacker who has a nose for the ball. He has great pursuit ability and is able to shed blockers. He has been the defensive anchor for a team that recorded seven shutouts this past season. He has been a part of three state championship teams and helped Holy Spirit to another state final, but they would lose this time to Bednarczyk’s DePaul Catholic. Regardless, the first team All-South Jersey, first team All-Cape Atlantic, and second team All-State player has a bright future ahead of him. He was the winner of the Mini-Maxwell Award his senior year. Steeb boasts a 4.6 40-yard time and a 30 inch vertical jump. He put up 385 pounds on the bench press and 435 pounds for squatting.

Rolle is another two way star, playing quarterback and cornerback in high school. He was a runningback his junior year before making the switch to quarterback his senior year. During his time at Delsea Regional, they won back-to-back state championships his junior and senior year. As a junior at cornerback, he had 25 tackles and four pass deflections. He was named All-Conference his junior year. As a senior, he tallied 26 tackles, 8 pass breakups, 4 interceptions, and a fumble recovery. He was named All-Conference once again, and also All-South Jersey. He also made the Brooks Irvine South Jersey Team. Rolle was also on the track team, where he was named All-County.

Reaves spent time as a safety and cornerback for Duncan Fletcher. It will be interesting to see where in the defensive backfield he will go. This past season, Reaves put together a nice senior campaign. He helped Fletcher into the state playoffs with a 10-2 record. Along the way, he finished the year with 31.5 tackles, 2 interceptions, 2 forced fumbles, and 4 blocked field goals. He was named defensive player of the week six times over the course of the season. His efforts landed him first team All-Gateway Conference honors and Florida Times Union All-First Coach Honorable Mention honors.

Stewart is a versatile football player. In high school, he transitioned between different positions without skipping a beat. He fielded offers from Pitt, Boston College, UConn, Georgia Tech, Rutgers, Syracuse, and Temple. He played quarterback and safety his senior year of high school. He had a good season at quarterback, but he will be looking to help the Wildcats defensively. Stewart will be playing in the Big 33 Football Classic held in Hershey, PA. He received numerous honors his senior year. Stewart was named the Times Herald Player of the Year, PAC 10 Most Valuable Player, and made it to first team All-State. He was also first team All-Area for offense and defense. He received the PCTV Outstanding Back of the Year award and the Mini Maxwell.

Weyler was both the kicker and punter for Cardinal O’Hara. With the graduation of Mark Hamilton, there is now an opening for competition at both kicker and punter. While Chris Gough, will most likely keep his job as place kicker, the other slots are up for grabs. Throughout his career at Cardinal O’Hara he converted 124 of 131 extra point attempts, and has had 70 touchbacks. There are videos of him making 50+ yard field goals since his freshman year of high school. Over the course of his senior season, he was 26 for 27 on PATs, made his only field goal attempt, and 88% of his kickoffs were touchbacks. He was named first team All-Catholic League in each of his four seasons.

The next two, Matt Brown and Ryan Bell, are preferred walk-ons, and will be working for a scholarship:

Brown played runningback and defensive back for nearby Malvern Prep. When he arrives at Villanova, he will be working with coach Brian Flinn to become a wide receiver. Brown rushed for 511 yards off of 53 carries. He also had 10 receptions for 159 yards. He had a total of 10 touchdowns this past season. He runs a 4.52 40-yard dash and was measured having a 35 inch vertical. He puts up 265 pounds benching and 405 pounds squatting.

*All Highlights are courtesy of Hudl