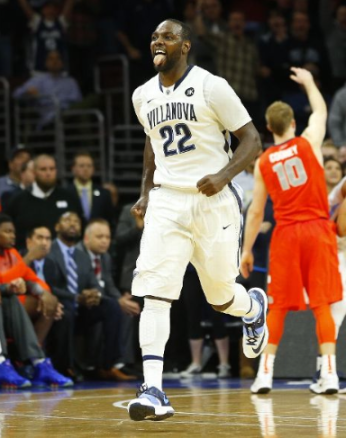 Today’s game featured two rivals whose history runs deeper than the freshly constructed barriers formed by their new conferences. While some of the faces and names have changed at Villanova and Syracuse, the intensity remained the same. It also had some similarities to the last time these two teams met at the Wells Fargo Center.

Villanova entered undefeated and ranked in the top-ten. Syracuse struggled their way to a 6-3 record, with a number of close wins and heartbreaking losses along the way. Regardless, both teams did not play like their record going in. The Orange made a statement from the opening basket that set the pace for the rest of the half. Syracuse won the opening tip and got the ball to Michael Gbinije for the first basket of the game. They pushed the Wildcats onto their heels on both sides of the court. They never gave the lead up for a single second in the first half. They were able to get good looks in the post and the perimeter, shooting 63% overall and 4-for-6 from long range. Meanwhile, the Wildcats were flustered by Jim Boeheim’s signature zone defense. As Syracuse’s lead increased, the Wildcats’ frustration took over the game. They threw up a number of questionable shots in traffic and played into the hands of their opponent. Villanova shot 35.3% in the first half and only 1-for-8 from beyond the arc. With Villanova struggling, Syracuse was able to stretch their lead into double digits. They reached their largest lead of the game thanks to a three pointer by Tyler Roberson to give them a 15 point advantage over the Wildcats. It wouldn’t last for long, Villanova would chip in a few more points before the break. Darrun Hilliard sank a jump shot as time expired. The Wildcats trailed the Orange 43-31 going into halftime.

The second half appeared to be more of the same. The Wildcats turned the ball over a couple of times and the Orange capitalized off of their misses. Jay Wright would call a time out, to tinker around with the game plan and talk to his team. Coming out of the time out, the Wildcats appeared to be more like their old selves. They moved the ball fluidly. Instead of forcing up shots, they patiently waited to find the best shot. Darrun Hilliard went on a run of his own, scoring eight straight points for the Wildcats. He made back-to-back three pointers to cut the deficit down to single digits. Ryan Arcidiacono would go coast-to-coast after taking the pass from a Hilliard steal, to make it a 10-0 run. Syracuse’s Roberson sank a jumper to end the run, but it didn’t stop Villanova.

Syracuse kept Villanova at an arm’s length away, as they would chip away at the lead. By the last few minutes of the game, Syracuse was hanging onto two basket leads. A JayVaughn Pinkston and-one would eventually cut the lead down to just one point. However, Rakeem Christmas got an and-one of his own on the other end to bring it back up to 66-62 with 1:06 left in the game. On the following possession, Pinkston turned the ball over and Syracuse chewed away at the clock.

As time winded down, the Wildcats opted to not foul but to continue to play defense instead. Finally, with 24 seconds on the clock, Dylan Ennis came in to foul Michael Gbinije. Gbinije missed the first, but sank the second to give Syracuse a five point lead. The Wildcats pushed the ball up quickly, resulting in a Pinkston layup. Syracuse inbounded the ball and it found its way to Trevor Cooney was fouled. He easily sank both free throws, giving Syracuse a 69-64 lead with 17 seconds left.

Villanova’s hopes for a victory looked bleak. However, they never gave up. The Wildcats went to work right away and found an open Josh Hart on the perimeter. Hart sank the three pointer, cutting the lead down to two points with seven seconds left. During the following inbounds pass, Gbinije didn’t have a clean look. After the ball bobbled around, it went into the hands Ryan Arcidiacono. He quickly sent it to JayVaughn Pinkston, who rumbled his way to the basket for the tough game-tying layup. Syracuse fans were silenced and the Wells Fargo Center echoed of Villanova chants. Just like the last time these two teams met in Philadelphia, it came down to a last second bucket to tie the game. It was the first tie of the game, and an important one too. As a result, the game went into overtime.

Overtime was no different. The game continued to be closely contested. For Villanova, 11 of their 13 points in overtime would come from the free throw line. As a team they were near-perfect from the line, making 11-of-12 shots. Syracuse hung on for dear life, as they played catch up with the Wildcats.

After a pair of important free throws by Josh Hart, Syracuse needed to respond. Now down by three with 29 seconds left, it was important to score. Kaleb Joseph dribbled his way towards the basket, until he was met by JayVaughn Pinkston. Pinkston came in with a vicious block, sending the ball into the hands of Josh Hart. Hart sank another pair of free throws to put them up by five. The Wildcats didn’t want to make the same mistake that Syracuse did, so they quickly fouled Trevor Cooney as he dribbled up the court. Cooney made both attempts. Villanova cleanly inbounded the ball and got it to Kris Jenkins. Jenkins easily made both shots, putting the game away permanently. Villanova completed the comeback, winning 82-77.

The trifecta of JayVaughn Pinkston, Darrun Hilliard, and Josh Hart paved the way to victory. Pinkston finished with a double-double and was the top scorer of the game. He rumbled his way to a 25 point, 10 rebound performance. Hilliard had 23 points, 5 rebounds, and 4 steals, before leaving the game in overtime. He was injured while diving for a loose ball and was taken to the locker room. Hart supplied another great game off the bench, with 21 points off of 5-for-7 shooting.

For Syracuse, five different players finished with double digit scoring performances. Michael Gbinije and Rakeem Christmas had 18 points each. Trevor Cooney finished with 17 points and 5 rebounds. Kaleb Joseph had one of the best games of his young career, with a double-double. The freshman point guard had 10 points and 10 assists. Tyler Roberson was 5-for-5 on the floor, en route to an 11 point game.