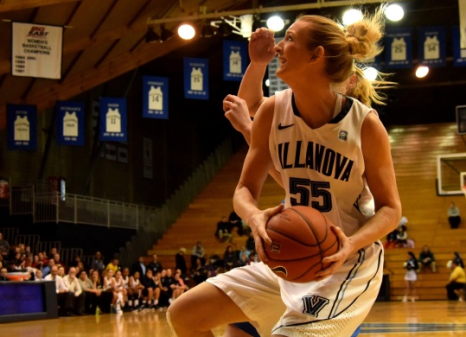 This past week we said farewell to 2014 and hello to 2015. During the transition, the men’s and women’s basketball teams kept working. Classrooms may remain closed, but the Pavilion doors stayed open.

The women’s team has been enjoying their Christmas Break so far. They have won three straight and four of their last five games. This past week was a busy one for them. On Tuesday, they played the NC State Wolfpack. Villanova took the lead from opening tip-off, until the Wolfpack fought back and had a seven point advantage over Villanova going into halftime. With 11:29 left in the second half, Emily Leer drained a three pointer to tie the game at 49. On the following possession, she came back to knock down another three to give Villanova the lead. NC State would rally back again to take the lead, and the game would remain close coming down the homestretch. Villanova would regain the lead and not look back. A turn around jumper by Taylor Holeman gave the Wildcats a 66-62 lead with less than three minutes left in the game. After an empty handed drive for NC State, Alex Louin sank a three to extend Villanova’s lead. Villanova won 74-65 and shot 15-for-32 from beyond the arc for the game.

A few days later, they returned to the Pavilion to play #25 DePaul. DePaul was projected to finish first in the Big East and was a favorite for the conference title. Villanova found themselves in a familiar predicament. An offensive spark in the first half by DePaul allowed them to take the lead in the first half. By halftime, the Wildcats trailed by seven. They started the second half well, closing in on the Blue Demons. An Alex Louin jumper trimmed it down to a one point deficit. Until, a 13-2 DePaul run made Villanova’s hopes for victory look grim. The Wildcats played catch up for the rest of the half, and needed every second to do so. A layup by Emily Leer with three seconds remaining, tied the game and brought it to overtime.

In overtime, the Wildcats only scored five points, but that would be all they needed. They did not give up any baskets to DePaul. The Blue Demons only scored two points, both received from a pair of free throws. It was a strong defensive effort in overtime that resulted in a 78-74 upset victory. Villanova was paced by strong performances by Emily Leer (25 points), Caroline Coyer (career-high 23 points), and Alex Louin (16 points).

The women’s team will take on Marquette today, continuing their Big East play.

Jay Wright knew it was going to be tough, if not tougher this season. Outside of a couple of losses to Creighton, the Wildcats dominated conference play last season. This year, success was going to come at a greater effort. In the first two conference games, the Wildcats were immediately tested.

Villanova kicked off their Big East schedule with a game against Butler on New Year’s Eve. The Bulldogs trailed early, thanks to a 1-for-10 start on the floor. The Wildcats took a first half lead, but were never able to successfully pull away. Butler started knocking down their shots and Villanova had little spurts of to maintain their lead. They held a narrow four point lead at halftime. Darrun Hilliard came out and scored eight straight points to give Villanova their first double digit lead in the game. Butler would slowly work back into the game, but a similar scoring streak by Kris Jenkins allowed for the Wildcats to maintain a double digit lead. It set the pace for the rest of the game, as it was smooth sailing from then on out. Villanova won 67-55. Ryan Arcidiacono had a game-high 15 points, with five assists and two steals to go along with it.

Yesterday, the Wildcats ventured into the Prudential Center for a game with the Seton Hall Pirates. Fresh off of an upset of #15 St. John’s, Seton Hall took that energy and built a 17-3 lead over Villanova to start the game. The Wildcats would rally back as the Pirates’ hot hand cooled off. However, they trailed Seton Hall 31-27 going into the half. Just as he did against Butler, Hilliard came out of the half to score seven straight points to give Villanova the lead. However, the Pirates did not go away. They were relentless, countering every basket and move Villanova made. With 37 seconds remaining, the game was tied at 58 and the ball was in Seton Hall’s hands. They looked to top scorer Sterling Gibbs, but Villanova was able to stop him and get a rebound. The Wildcats’ missed their last second shot and the game went into overtime.

In overtime, Daniel Ochefu made the lone basket for Villanova. Despite his herculean effort, scoring 19 points and grabbing 24 rebounds, Villanova lost the game. With 22.5 seconds remaining, down by three, the Wildcats turned the ball over. Seton Hall would go onto win 66-61. Their 13-1 start has not been done since the 1937-1938 season.

Recap: Wildcats Close Out 2014 With a Win Over Butler
Recap: Pirates Sink Villanova’s Ship in OT