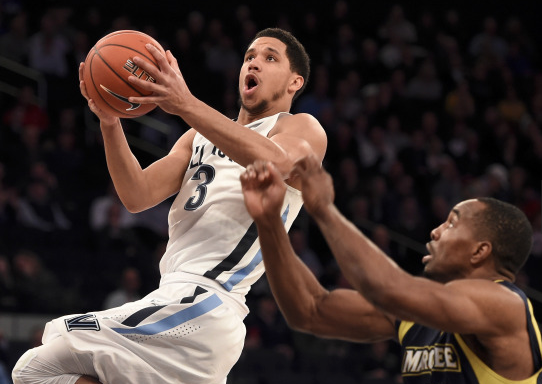 The Wildcats didn’t show any sign of the past haunting them. They shut down any remaining worries for another big disappointment.

Villanova was hot from the start, taking an 18-8 lead before the first media time out. The Wildcats were pouring it on from long range. The Wildcats started the game 6-for-8 on the floor and 4-for-5 from beyond the arc.

“We wanted to limit their threes,” said Marquette head coach Steve Wojciechowski. “The first four threes they made were from the NBA line.”

Despite having a defender in the way, the Wildcats pulled up with confidence. However, after the time out, the magic was gone.

The Golden Eagles went on an 8-0 run. Thanks to back-to-back threes by Steve Taylor Jr. and Jajuan Johnson, Villanova’s lead quickly evaporated. Jay Wright called for a time out to get his team back on track.

Josh Hart checked into the game and showed why he was deserving of the Big East Sixth Man of the Year Award. The sophomore guard changed the game, quickly heating up on the floor. Hart scored 11 straight points, which was only the beginning of a 17-0 Villanova run.

“Josh brings so much to us,” said Villanova head coach Jay Wright. “He is the perfect sixth man, probably won’t be one next year.”

Marquette switched up to a full court press, but that did not come close to slowing down the Wildcats. Dylan Ennis nailed back-to-back three pointers to top off the run. The streak was eventually broken up by a layup by Marquette’s Luke Fischer.

However, Josh Hart wasn’t done just yet. He came back into the game to drain a three pointer as the clock was winding down in the first half. It was the perfect ending to a perfect start for the Big East Sixth Man of the Year. Hart scored 14 points in the first half, shooting 5-for-5 overall. Four out of Hart’s five first half baskets were from beyond the arc. Villanova took a 39-21 lead at the half.

“I felt confident,” said Hart. “My teammates did a great job of finding me.”

The second half ended up being a mere formality. The Wildcats played with a heightened intensity on both ends of the court, resulting in the growth of their lead. Villanova fans watched the lead stretch into the twenties and thirties. The insurmountable lead ended up being too much for the Golden Eagles.

Offensively, Villanova did what they do best – share the ball. The Wildcats were always looking to make the extra pass to find an optimal look to the basket. Often at times it led to Daniel Ochefu dunking the ball, or even a graceful three pointer. Regardless, the damage was felt by the Golden Eagles, as they watched the clock transform into the final countdown for the end of their season. The Wildcats assisted on 22 of their 30 baskets. They also tied a Big East Tournament record for three pointers as a team, with 17.

Defensively, they brought Marquette out of its comfort zone. Sharpshooter Matt Carlino tied a Big East Tournament record with eight three pointers in the win against Seton Hall. Today, Carlino had to work to get his one and only three pointer. The Wildcats’ suffocating defense did not give Carlino any space.

“He has one of the quickest releases,” said Coach Wright. “We couldn’t give him any room. We were excellent in the first half.”

Carlino was scoreless in the first half, finishing with only five points. He was 2-for-11 overall and 1-for-8 from long range.

Aside from containing Carlino, the Wildcats forced 22 turnovers. Derrick Wilson had a Big East Tournament record 14 assists last night. While he had nine assists today, he also accounted for nine of his team’s turnovers. The Golden Eagles were held to 18-of-46 (39.1%) shooting and 5-of-18 (27.8%) from three point range.

Villanova cruised to victory, with everyone getting a piece of the action. The Bench Mob checked in during the final minutes of the game, much to the crowd’s delight. The Wildcats won 84-49.

Josh Hart led the Wildcats with a game-high 20 points. He was an impressive 7-for-10 overall, and an efficient 5-for-7 from beyond the arc. Darrun Hilliard finished with 13 points and eight assists. Dylan Ennis added 12 points, four rebounds, and a pair of steals.

For Marquette, Derrick Wilson had a team-high 11 points. Luke Fischer provided ten points and a pair of rebounds.

It’s the end of the road for Marquette, who will bring in a promising class of recruits next year. In the meantime, the Wildcats will roll on. They will take on the winner of Providence-St. John’s tomorrow night at 7 p.m.