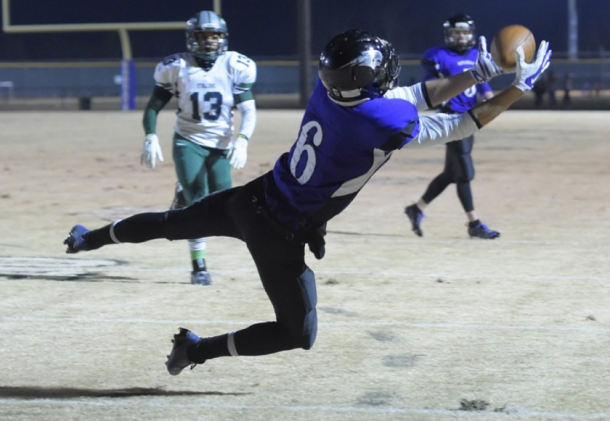 Zac Kerxton, a six-foot and 180 pound wide receiver from Haymarket, Virginia, has committed to play for the Villanova Wildcats. The speedster announced his verbal commitment to play for head coach Andy Talley last night. Kerxton is coming off of an excellent season, where he racked up 60 receptions for 1,431 yards and 25 touchdowns. His efforts did not go unnoticed, as he was named to the 6A All-State Team. He was the only junior to receive such an honor.

Kerxton officially received an offer from Villanova when he visited the school over a week ago. He felt instantly connected with the school and also looked at the academic value of the university.

“I fell in love with the school,” said Kerxton. “I’ll get a great education.”

He picked Villanova over CAA rivals James Madison and Towson, as well as, Elon, Cornell, and Fairmont State. Kerxton adds speed to the Wildcats’ arsenal of wide receivers. It is his greatest asset, as he frequently gives defenders a tough time of keeping up with him. He is often seen getting behind the defense with his speed.

When he’s not burning cornerbacks on the football field, you can see him racing down the track. He is a sprinter for his school’s spring track team and also competes in the long jump. It helps him prepare physically for his upcoming senior season of football.

With the stresses of picking the right school out of the way, he can now look ahead to his final year of high school football and what he can bring to Villanova. Fortunately for Kerxton, the transition of high school to college football might not be that rough. The school has hired a new head coach for the fall who plans to install a spread offense that is similar to the Oregon Ducks – which just so happens to be what the Villanova offense is modeled after.