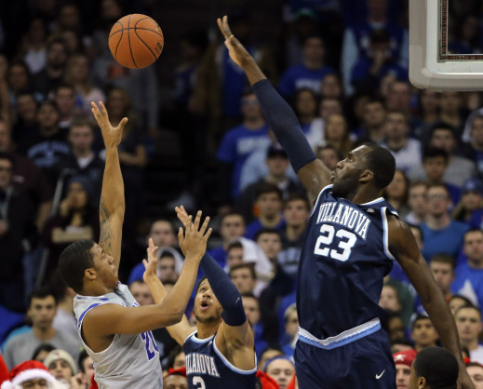 Villanova edged out Seton hall thanks to last second grit and a tough defensive effort. A go-ahead lay up by Ryan Arcidiacono (10 points, two rebounds, four assists) with a few seconds left, combined with sloppy ball handling by Seton Hall, inevitably sealed the win. The Wildcats survived a scare at The Rock, winning 72-71.

“That was a tough road win,” Villanova head coach Jay Wright said. “I thought our defense in the final minute was good, we had a tough time containing them before that.

The game was a hard fought game on both sides from the opening tip-off onwards. Villanova returned to their vintage offense: for better and for worse. The ‘Cats rained threes, and for the first part of the first half, it seemed like it was working. In particular, stand-out freshman Jalen Brunson (nine points and four assists) looked especially effective early on, as he made two of his three three pointers right from the get go.

Despite this early three-point barrage, the Pirates were never more than nine points behind. Sharp shooting by Pirate guard Desi Rodriguez never allowed the ‘Cats to pull ahead by a significant margin. In addition, the ‘Cats struggled to gain defensive rebounds thanks to solid offensive rebounding by Seton Hall. This offensive rebounding kept the Pirates’ offensive hopes alive on several drives throughout the first half. At the end of the half, Villanova took a 35-33 lead.

The second half continued the story of the first: tough, gritty, classic Big East basketball. The Wildcats also showed a lot of depth as a few players began to run into foul trouble. Daniel Ochefu (four blocks, three rebounds, six points), who had been playing strong in the post up to that point, committed his fourth foul towards the middle of the second half. He was replaced by Darryl Reynolds, who had a solid defensive game (seven defensive rebounds), and played tough in the post.

As has been the case all year, Josh Hart once again proved to be one of the best players on this Villanova team. Hart finished the night with another impressive double-double (15 points and 10 rebounds). Hart was an ace all night inside the paint, beyond the arc, and on the defensive side of the ball.

The second half for Villanova was also marked by a change of pace for the offense. The long range attack was replaced with an attack that emphasized smooth ball movement and getting inside the paint. Josh Hart, along with effective bench play by Phil Booth and Mikal Bridges, allowed Villanova to attack the attack the basket.

The game remained a nail-biter for the whole second half.  With two minutes left, Seton Hall’s top player, Isaiah Whitehead, sunk a three pointer to take a 69-67 lead. This lead would never be extended, nor did it last too long. Once the game was tied, Arcidiacono gave the Wildcats the lead, and Ochefu added a free throw to put them ahead.

“In the end, it was just a matter of two seniors who have been there making big plays for us in the final minute,” Wright said.

The Wildcats will go on to play the Providence Friars this Saturday at the Wells Fargo Center. Tip-off is at noon.

« Watch For It Wednesday: Snowpocalypse, the Sequel
Sabotaging the Pirates’ Ship: A Fan’s Reaction to the Seton Hall game »