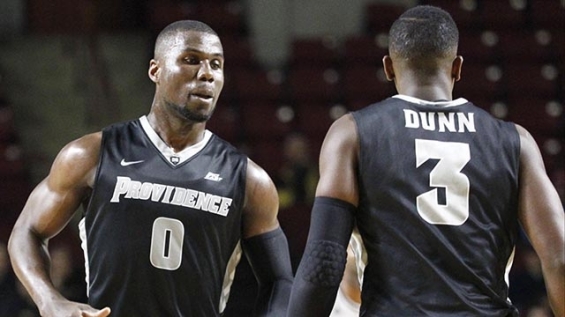 Scouting Report: All eyes will be on Kris Dunn, Providence’s star point guard, who is considered to be a high pick in this year’s NBA Draft. Dunn means everything to this team, and more. The 6-foot-4 guard opted to return to get his degree, putting off the draft for one more year. He’s averaging 17.2 points per game, 6.2 rebounds per game, and 6.7 assists per game. He has scored double figures in every game he has played in except for two. There were a reported 34 NBA scouts at the Villanova-Marquette game. Chances are there might have been even more if the blizzard didn’t come and hit Philadelphia. DraftExpress has him going in the top five in its mock draft.

Dunn excels on both ends of the court. On offense, he is adept at attacking the basket. He is a slasher-type guard. He has the quickness and agility to blow by defenders and get to the basket. Dunn has good court vision and can rack up assists. Sometimes, he can be a little too ambitious and turn the ball over. He’s doing a better job of managing it this year, but his 3.5 turnovers per game are not ideal. If given the opportunity, he’ll shoot some threes, but it isn’t his first option. Dunn is 21-of-57 (36.8%) from long range. On defense, Dunn’s 6-9 wingspan helps him disrupt passing lanes and snatch the ball. His 2.9 steals per game are the best in the conference and second-best in the nation.

While Dunn’s performance was expected this year, there were other questions raised about who would fill in the gap left by LeDontae Henton. Henton was Providence’s leading scorer last season and was a threat at the forward position. Head coach Ed Cooley was able to find the answer in sophomore Ben Bentil. Bentil’s play this season has shattered all expectations. Bentil is thriving in his bigger role, tripling his scoring output in just one season. He’s averaging a team-high and conference-best 19.2 points per game. Bentil also has 7.9 boards per game to go along with it. He has scored at least 20 points in 10 games this season. Helping Bentil inside is Rodney Bullock. Bullock is a solid rebounder at 7.3 rebounds per game. He quietly gets his points, as a third scoring option behind Dunn and Bentil. Once in a while he can have a 20-point game and become the featured option of the game.

As a team, Providence averages 74.1 points per game, which is about middle of the pack in the Big East. The Friars like to primarily take the ball inside. They are much more successful inside the arc, where they drain 49.7% of their shots. This is a stark contrast from their mediocre three-point shooting. Providence shoots a conference-worst 30.7% from long range.

Outlook: Both teams barely survived their previous game going into this weekend. Providence barely edged out #18 Butler at home, winning by three. Meanwhile, Villanova survived an upset bid from Seton Hall on the road. This game features a clash between last year’s co-Big East Players of the Year, Kris Dunn and Ryan Arcidiacono. They have different styles of play, with Arcidiacono opting to play from the perimeter, and Dunn driving the ball inside. Both players will be crucial in how their respective teams do on Sunday afternoon. The offense runs through them, and it will be important to get points.

This game will be similar to how it was last season at Madison Square Garden – a defensive, close game. Each basket held great importance, as it went down to the final seconds of the game. Just as important as he was in the Big East Tournament, Josh Hart will be crucial in this game. Hart has notched double-double performances in four out of the last five games. The ‘Cats will need another big performance out of him. Providence will look to make this a close one. The Friars can slow things down a bit to catch their breath against the deep Villanova rotation. Villanova has the depth to wear down the three-man band of Dunn, Bentil, and Bullock. A strong defensive effort should keep Providence in check. The Friars struggle scoring the ball at times, and Villanova should capitalize. The Wildcats should win this one in front of a home crowd, or the remnants of what shows up tomorrow. It might be a different story when Villanova travels over to enemy territory in Providence, but for now, this is looking like Villanova’s game.