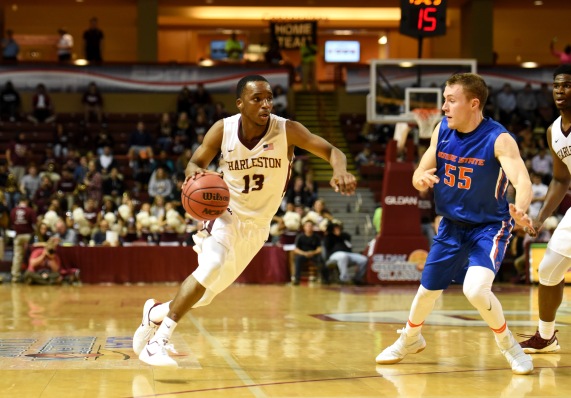 Scouting Report: Charleston is coming off of two consecutive blowout losses at home–UCF and Wake Forest–and are hoping to get their groove back against the Wildcats. Leading the charge for the Cougars is Joe Chealey, who is excelling in his first year back after taking a medical redshirt year due to a leg injury. Chealey averages a team-high 15.6 points per game and is a pure slashing, scoring threat. Chealey is a combo-guard who is adept at getting to the rim and creating his own shot in the paint, although his decision-making does leave something to be desired. His assist-turnover ratio this year is 2:1, however, he’s showing slight improvement so far in this young season with handling the ball. Additionally, Chealey is not able to space the floor from the guard spot, shooting under 30 percent beyond the 3-point line for his collegiate career. Make no mistake–Chealey is dangerous. He has shown well-above average slashing and has no trouble finishing over much larger defenders. Helping him out is Jarrell Brantley, a South Carolina native who won the CAA Freshman of the Year last season. Brantley is a jack of all trades, an athletic forward who can defend, finish at and above the rim, and can occasionally sink his shots from deep. Brantley averages 12.8 points per game and is great at cleaning up the boards, with a team-high 8.4 rebounds per game. Brantley’s only real weakness is his basketball IQ, averaging nearly four turnovers a game so far. If he can improve that, Brantley could potentially a fearsome threat on both ends of the court. Coming off the bench for the Cougars is freshman guard Grant Riller, another medical redshirt who has been hyper-efficient coming off the bench for head coach Earl Grant. Riller is a pure scorer with the ability to make shots from anywhere, but is lacking defensively and can occasionally take over the ball to the detriment of his team. So far this year, he’s averaging 9.2 points per game and shooting a blistering 46.7 percent on the floor. Rounding out the starting lineup for Charleston are Nick Harris, a defensive-minded center who has a tendency to disappear offensively, Cameron Johnson, a prototypical 3-and-D wing, and Payton Hulsey, a former JUCO transfer who shown in his second  among the best lockdown defenders in the CAA.

Outlook: If we’re being completely honest here, Charleston has absolutely no shot of winning this game. Villanova handily beat two teams on the road in Wake Forest and UCF that, on paper, would be very good upset candidates due to their size. Charleston lost to both of these teams at home by 20 points or more. Expecting Charleston to somehow play that far above their heads at the Pavilion is, quite frankly, ludicrous. Charleston has a very good defense, but as good as that defense is, their offense is even worse. Expect Josh Hart, Darryl Reynolds, and Mikal Bridges to finish at or near double-digit rebound totals, as Charleston has only shot 37% from the field this year. All in all, with Thanksgiving just around the corner, the Wildcats are likely to start the feasting a day early this year.