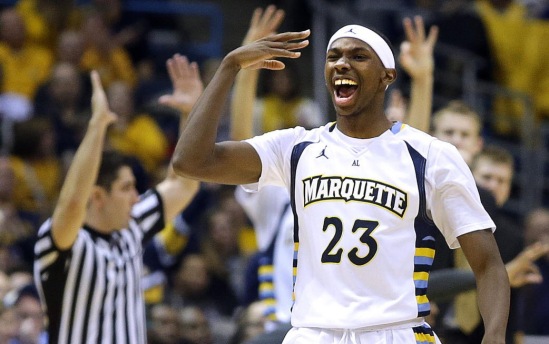 Scouting Report: The post-Henry Ellenson era is going well so far for Marquette. While the Golden Eagles are coming off a loss to Seton Hall, they are a solid 10-4 so far, and boast one of the best offenses in the country with 83.8 ppg (25th in the country). The Golden Eagles are led by senior guard Jajuan Johnson, who leads the team with 13.4 points per game and 3.1 assists per game. Johnson can present a problem with his long frame from the guard position. His game is predicated on speed, length, and explosiveness that has developed over the years. He excels in transition as a great finisher around the basket and a smart decision maker with the ball in fast break situations. Defensively, he causes problems for Villanova as his wingspan, according to DraftExpress, stretches as far as 6-foot-9. This length has allowed Johnson to be a disruptive force in passing lanes and average a Big East-best 2.6 steals a game. If there is one area that can be exploited in Johnson’s game, it is his perimeter shooting. Johnson can be pretty streaky from deep.

As good as Johnson may be, there have been significant contributions gained from others. One of those contributors is freshman guard, from Chandler, Ariz. and backcourt mate, Markus Howard, who has made great strides so far. He is averaging 10.8 points per game. While he’s not the tallest, standing 5-11, he is a dangerous player on the floor. He is a lights out perimeter shooter, posting a Big East Conference-best 53.7 percent from 3-point range. Howard also nearly automatic from the free throw line, knocking down 96.3 percent of his attempts. His free throw shooting ability has set an example of his team to follow and it’s served them well, the Golden Eagles are 81.4 percent from the line as a team—second in Division I. Even though Marquette relies heavily on their guards, the Golden Eagles have gotten major help from senior center Luke Fischer. He is a solid scorer inside and an enforcer on both ends of the court. This season, he is averaging 13.0 points per game and 6.3 rebounds per game. Fischer is a traditional back-to-basket player and has a sweet hook shot that has helped him sink 64.4 percent of his shots. However, that’s how far his game goes. He doesn’t boast a steady jumper and is restricted to keeping it close. Defensively, Fischer’s game is more dependent on making opponents uncomfortable in the post. Also be on the lookout for sophomore Hannif Cheatham. Cheatham is much like Johnson in that he is a versatile, Swiss army knife type player that can do it all. He is a slightly better shooter than Johnson, however.

Also, keep an eye out for Sam Hauser, another freshman sharpshooter that’s already made an impact on the team. Hauser has knocked down 46.2 percent of his long range shots this season. Another newcomer making noise is UNC Asheville transfer Andrew Rowsey. Rowsey is a smaller point guard that isn’t afraid to take the big shot or attack the basket. He plays fearlessly and is a sparkplug off the bench. Then there’s Katin Reinhardt, a graduate transfer that previously played at UNLV and USC. Reinhardt has been underperforming thus far, but continues to see the court a lot. He plays rather selfishly and is shooting just around 33 percent.

Overall, Marquette is efficient offensively. It is very good in transition and on fast breaks, which many come after forcing turnovers. The Golden Eagles have the quick hand, boasting a 12.8 percent steal rate–the ninth highest in Division I according to KenPom. They like to move fast and love their up-tempo style of play.

Outlook: Since 1960, Villanova leads 19-9 in the all-time series against Marquette.  Villanova has the size and length to matchup with the Golden Eagles. The Wildcats have the ability to neutralize the lengthy guards of Marquette, as sophomore wing Mikal Bridges can guard multiple positions on the perimeter. While, the Wildcats looked good defensively in a upsetting loss to Butler, they look to bounce back on offense after scoring a season-low 58 points. Also, Villanova hopes to shoot more efficiently from the field and the three-point line as well as moving the basketball. To prevent back-to-back losses,  Jalen Brunson is going to have to continue his hot scoring and senior guard Josh Hart will have to bounce back from his worst shooting performance (27 percent) of the season. While guard play is will be key in this matchup, the X-factor might have to be Darryl Reynolds ability to hold his own in the low post against Fischer. Marquette’s greatest strength on defense is stealing the ball, so it will be up to the ‘Cats to take care of the basketball and slow the tempo of the game to come out with a victory.

« One Mile Up and Thousands More West: Villanovan Spirit is Strong in Denver
Strong Offensive Effort Aids Wildcats in Rebound Win over Marquette »