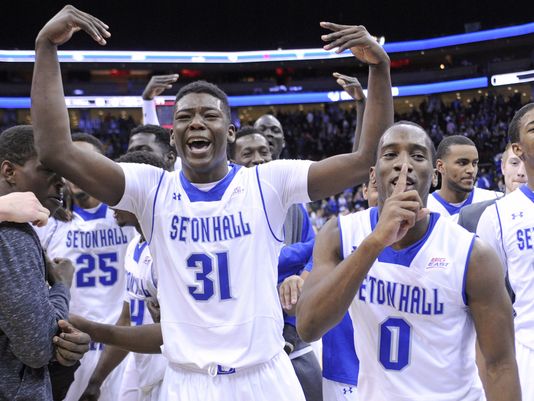 Scouting Report: A promising start to the season for the Seton Hall Pirates seems to have hit a turbulent rough patch. After starting the season 10-2, the Pirates have lost three of their last five games heading into Monday night’s matchup on Martin Luther King Day. This will be the first meeting between the two Big East rivals since Seton Hall unseated Villanova in the Big East Tournament Championship. Without Isaiah Whitehead, now of the Brooklyn Nets, the Pirates have relied on others to fill the void. One of those is junior guard Khadeen Carrington who leads the team in points per game with 18.5 points per game along with shooting an eye-popping 46.2 percent from 3-point range. He has evolved into an all-around scorer, far from just being a slasher. This will be a huge test for the Wildcats, as they sixth best in Division I college basketball in 3-point line defense, holding opponents to a 28.5 percent conversion rate. Despite being the best scorer in the Big East, one glaring weak sport has been an inability to convert free throws, as he has knocked down an uninspiring 62.7 percent from the free throw line. When in trouble, he can look to junior forward Desi Rodriguez for help with scoring. He is the Pirates second-highest scorer, with 16.6 points per game and is being relied on to help Carrington. The 6-6 stretch forward displays incredible athleticism and is lethal in transition using his strong frame and physique to bully opponents on his way to the rim. When he is not attacking the rim, he is setting himself out on the three-point line to knock one down as he has converted 40.6 percent of his shots from three-point range. Like Carrington, one way he will not score is at the free throw line as he has knocked down an uninspiring 62.7 percent of his free throws.

Villanova will have to look out for junior forward Angel Delgado in the paint. His 14.7 points per game is third on the team, but that is not where his value is to the Pirates. He will be the tallest player on the basketball court and will fight for extra possessions as he has grabbed 12.4 rebounds per game, good for third in Division I basketball and is a defensive presence for opponents. It will be tough to keep him out of the paint as Delgado uses his wide body frame to position himself in the paint. He has become on of the leaders on Seton Hall and is the emotional spark plug for the team and will lay his body on the line to help his team win. Delgado is a double-double machine, notching 13 of them overall this season. Entering Monday’s game, he has achieved a double-double in 11 straight games. In a lineup where every player has a significant role, no one exemplifies the idea of unselfishness more than Mason Jones, a senior transfer from Wake Forest. He helps fill the point guard void that was a question mark coming into the 2016-2017 season. His main job is to be the distributor of the basketball, leading the Pirates with 3.6 assists per game, and set his teammates up for success along with making smart decisions in crucial moments of a game. Then there’s Ismael Sanogo, junior forward from nearby Newark, NJ. Despite only scoring a pedestrian 3.3 points per game, he is looked at as the Pirates best defensive player. He is second on the team with 7.1 rebounds per game and is a versatile defender, who is capable of guarding multiple positions due to his length, athleticism, toughness and lateral quickness. He can switch in pick-and-roll situations and handles guards on the perimeter. Finally, there leaves the talented freshman guard Myles Powell. He is averaging close to 10 points per game as he is a streaky shooter and is the teams most reliable free throw shooter converting 85.7 percent of his free throws.

Overall, Seton Hall is not going to do anything that owes many people. They have talented players that rely on one another and everyone knows their role. They are a very good offensive that scores in the paint and very good out on the perimeter. Defensively, they outmuscle their opponents by grabbing rebounds and gaining extra possessions, where they are 19th in Division I in offensive rebounding percentage, according to KenPom. However, they are one of the worst free throw shooting teams as the Pirates, as a whole, converting only 61.2 percent of their free throws.

Outlook: Seton Hall is heading into this matchup having lost two close games on the road at Marquette and Providence. Darryl Reynolds will have to hold his own in the paint and fight for rebounds against Delgado. Defensively, guard-forward Mikal Bridges will be called on to be the defensive stopper for the Wildcats, guarding multiple positions out on the perimeter. Also, guard Donte DiVincenzo and sophomore transfer forward Eric Paschall will have to build off their strong performance on Saturday at Madison Square Garden against St. John’s. They will be looked at for help with rebounding and making their presence felt in the paint and on the perimeter. Josh Hart and Kris Jenkins will be looked at to score points and contribute defensively and provide a bounce back game after Saturday’s showing. Also, Jalen Brunson will have to be aggressive and attack the Pirates and create opportunities for others.