Home › Basketball › Kings of the Big East: Wildcats Down Bluejays For Second Title in Three Years

Kings of the Big East: Wildcats Down Bluejays For Second Title in Three Years 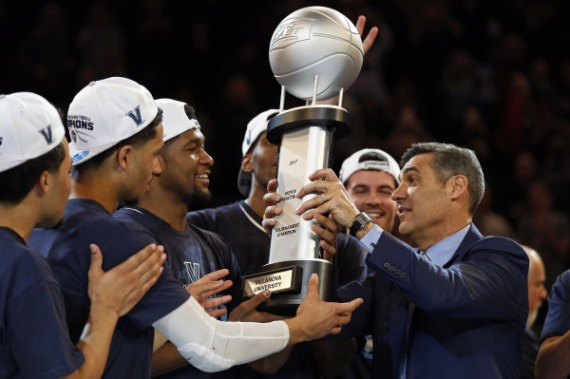 If there’s one word that can sum up Villanova basketball in the past twelve months, that’s it. Right now more than any other time in the history of the program, when you hear the word ‘champion’ in a discussion of college basketball, your mind immediately goes to the deep, royal blue, to Omari Spellman dancing with his V’s up, and to Jay Wright’s pinstripe suit.

The Wildcats added another title to their impressive list on Saturday night. The team is now the 2017 Big East Tournament Champions. They handled Creighton extremely well, winning it all in The Garden, 74-60.

Not only are they entering the Big Dance as the defending NCAA tournament champions, but they’re going into the tournament with the most wins ever by a defending national champion (31). This is the senior class’ second Big East tournament crown in three years, and they’ve been champions of the Big East regular-season every single year of their careers.

“It starts at the top with Jay [Wright], obviously,” said Creighton head coach Greg McDermott. “But that senior class, what they’ve accomplished is incredible.”

Senior Josh Hart, already named Big East player of the year, became the third player ever to be named the tourney MVP twice. He now joins the exclusive company Patrick Ewing of Georgetown and Louisville’s Peyton Siva, the only other two-time Dave Gavitt Trophy winners.

Hart racked up 29 points in the championship game, with 15 of them coming right away in the first half. The guard was 4-of-8 from deep. He played the entire game determined to come away with the win that eluded him last year.

“[Wright] wants us to keep getting better, he wants us to keep being coachable,” Hart said. “Last night, we talked as a team, and I think every team right now would be happy to be in their conference championship game.”

From start to finish, the Wildcats proved they were more than happy to be in the championship game, they were determined to win it. They forced 17 Bluejay turnovers, converting them into 25 points. Not only was Villanova’s offense phenomenal, the Wildcat defense was nothing to blink your eye at.

Late in the second half of the game, Villanova went almost six minutes without making a single shot other than from the free throw line. A combination of great free throw shooting–15-of-19 (78.9 percent)–and intense defense made it hardly noticeable on the court.

“We might have played our best game defensively of the year,” Wright said. “And I think it’s because these guys know how good they are offensively.”

With the game tied at 11 and less than 10:30 to go in the opening half, the Wildcats went on to take control of the game, outscoring the Bluejays 25-11 the rest of the way until halftime. The run was capped off by a smooth Jalen Brunson euro step that left Isaiah Zierden frozen in his tracks. The Wildcats took a 36-22 lead going into the break, and only continued to pile it on from there.

The ‘Cats definitely knew which buttons to push in order to send Creighton reeling. Immediately after Creighton’s star freshman, Justin Patton, got his fourth foul, Hart drove right at him and drew the fifth foul to send him to the bench. While he had a few rim-rattling alley-oop finishes, he was quiet for most of the night. The 7-foot center was limited to 10 points and five rebounds, not too far from the production of Cole Huff and Marcus Foster, who led the ‘Jays with 13 points each.

The championship Villanova team had a lot to celebrate Saturday night, but were noticeably subdued. After the win, there were a few hugs exchanged, some smiles, and a bit of a dance celebration by Kris Jenkins, as Hart was given his MVP trophy.

“Last time, we stormed the court,” Hart said. “Everyone jumping around and doing all that, but… I think part of it was just exhaustion. We just played as hard as we could for forty minutes.”

Jenkins did more than celebrate the win though, he contributed to it in a big way. The senior put up 14  points and a pair of rebounds and assists each to help the ‘Cats over the edge. Brunson helped out as well, putting up 17 points and five assists. Both Jenkins and Brunson were named to the All-Tournament team.

Regardless of what impressive feats the team pulled off in the past few days, the NCAA tournament is now looming ahead. It’s all that anyone wants to talk about anymore, and with good reason. The Big East is behind us for the rest of the season, but it won’t be soon forgotten.

“This is the final piece going into the tournament,” Wright said. “I don’t know what we’re going to feel like till a couple days ahead. This tournament was like a break from all of that, because you get here and it’s just… you know the NCAA tournament is coming – you get here, it’s just in New York, it’s just Big East teams.. It’s that New York, Madison Square Garden vibe. This was a really nice break. I feel like we were like everybody else here. Because we weren’t defending champions.“

They have less than 24 hours to enjoy this title, with Selection Sunday on the horizon. With that, the Big East championship needs to be filed away in the special folder reserved for 4.7 seconds, for record breakers, and for bragging rights that will be pulled out years down the road. Soon enough, it’ll be time to dig those memories out.

“It was always my favorite basketball, all my favorite teams,” Wright said about the Big East. “Villanova was my favorite team, and then I coached here in New York, so every time I come back here there’s a lot of friends. I think the Garden is the Mecca of college basketball, so I just enjoy so much seeing my guys enjoy it, and win, because I know it’s special to them too. I get the real good glow inside seeing these guys be happy and accomplish something.”

It’s good that the Wildcats enjoy playing at Madison Square Garden, because they have a chance to return to New York in just a couple weeks.